I've wanted to do this for a while. With H almost three and able to kick a ball, I didn't have a reason not to do it any longer.

There are plenty of plans online to build a goal out of PVC pipe. The problem is they weren't what I wanted. All of them look the same. They all have a diagonal bar connecting the crossbar with the back frame. See here. And here. Or here.

What I wanted was a horizontal bar coming off the crossbar, making it deeper so the ball wouldn't just bounce down and out of the goal. I found this plan and started sketching.

On my first trip to Home Depot (there were many) I discovered they didn't have the three-way connector that design required for both the crossbar corners and the bottom frame corners.

So I was back to the drawing board. I eventually realized that I could take the most popular design and instead of a straight diagonal put in two bars with an angled connector. So I started to gather parts and start building, going off a design that I created, something I couldn't find on the internet. (I'm sure I'm not the first person to do this, but the cool part for me was following my own design, not that it's never been done.)

My initial idea was 6' x 4' and then I realized that's really big. I scaled back to 4" x 3". It's not too bad sawing through PVC. It only took me two hours to build the frame.

The net arrived and I just had to hope that it would fit. It was amazingly close. But a little short from side to side. At that point I measured the inside opening. It was 54". I had started with 48" crossbars, but the connectors add width. So I cut 6" off each crossbar and the net fit. And I ended up with the 48" opening that I had originally planned on.

Most of it was easy. The only trick was figuring how deep to make the goal and how long to make the diagonal supports. The end result was I have a 9" deep horizontal off the crossbar and a 20" deep bottom frame. Because of the angle (60 degrees) and the lengths that I had, when it was assembled the bars coming off the crossbar angled down a bit instead of being perfectly horizontal. But I decided that was okay. And it actually provides a benefit. If I made them truly horizontal, I would have needed a deeper frame. Keeping it 20" makes it very easy to fit through doorways and hallways. 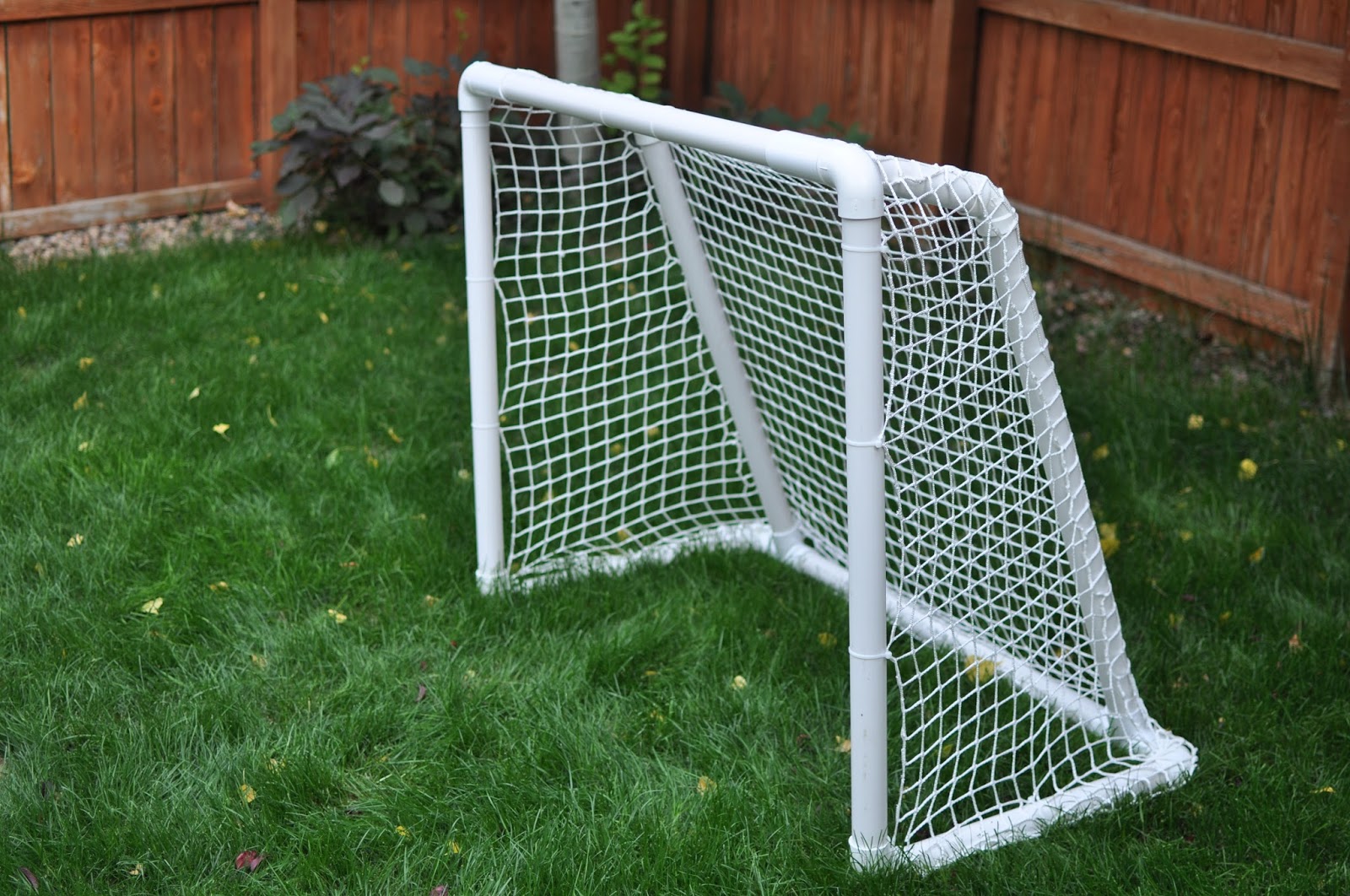 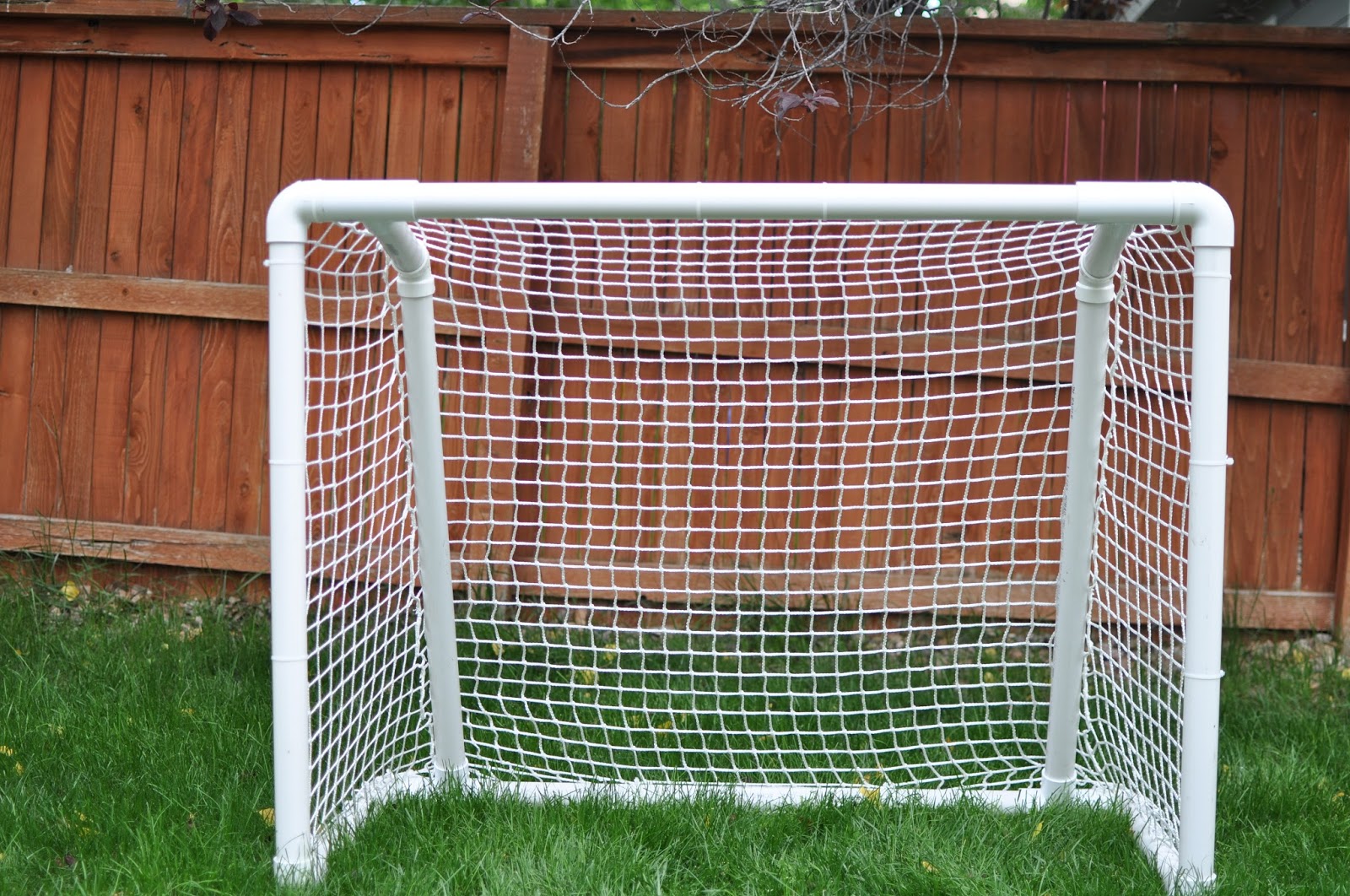 (The goal is level. Our back yard is slanted.) 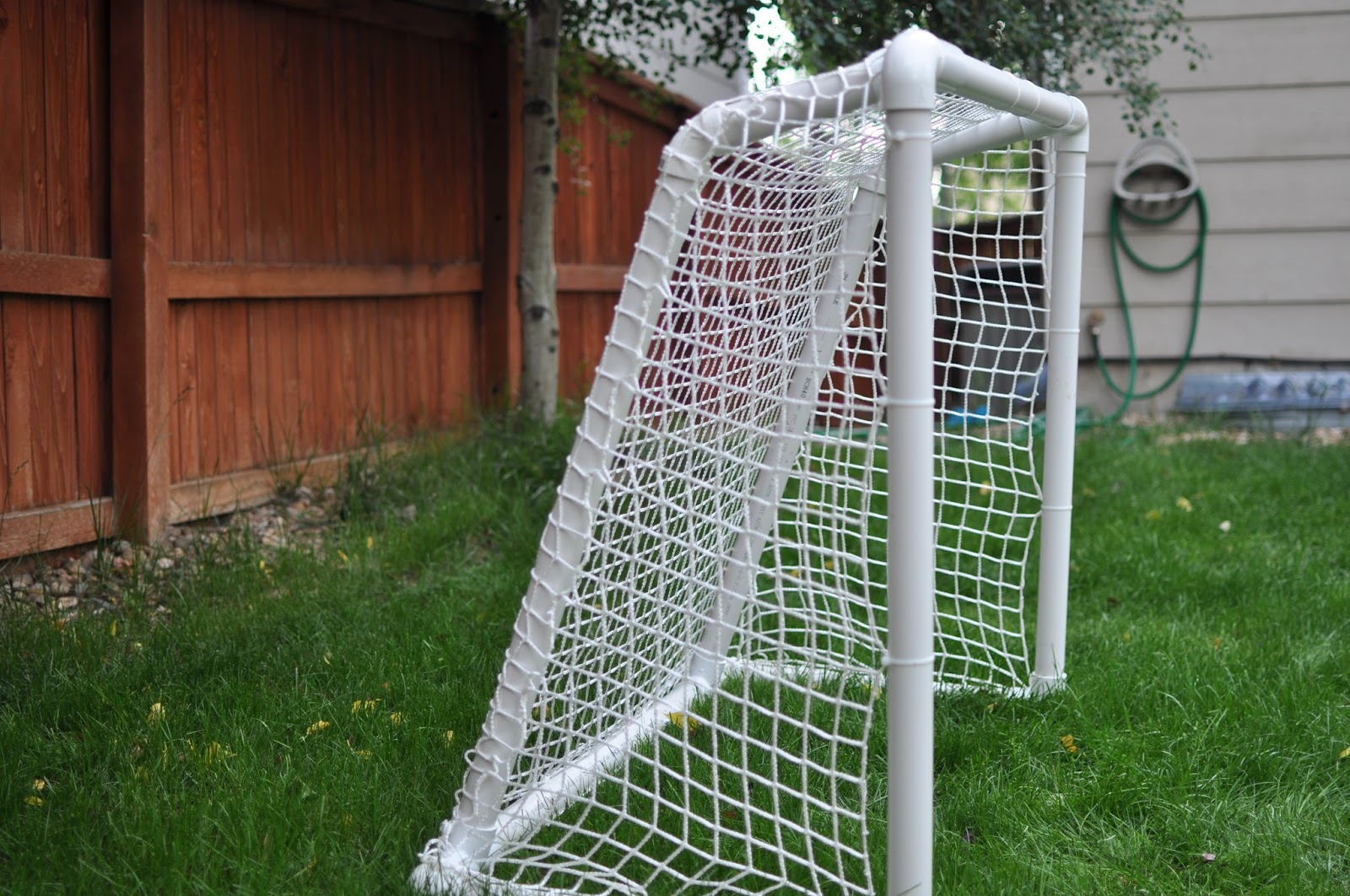 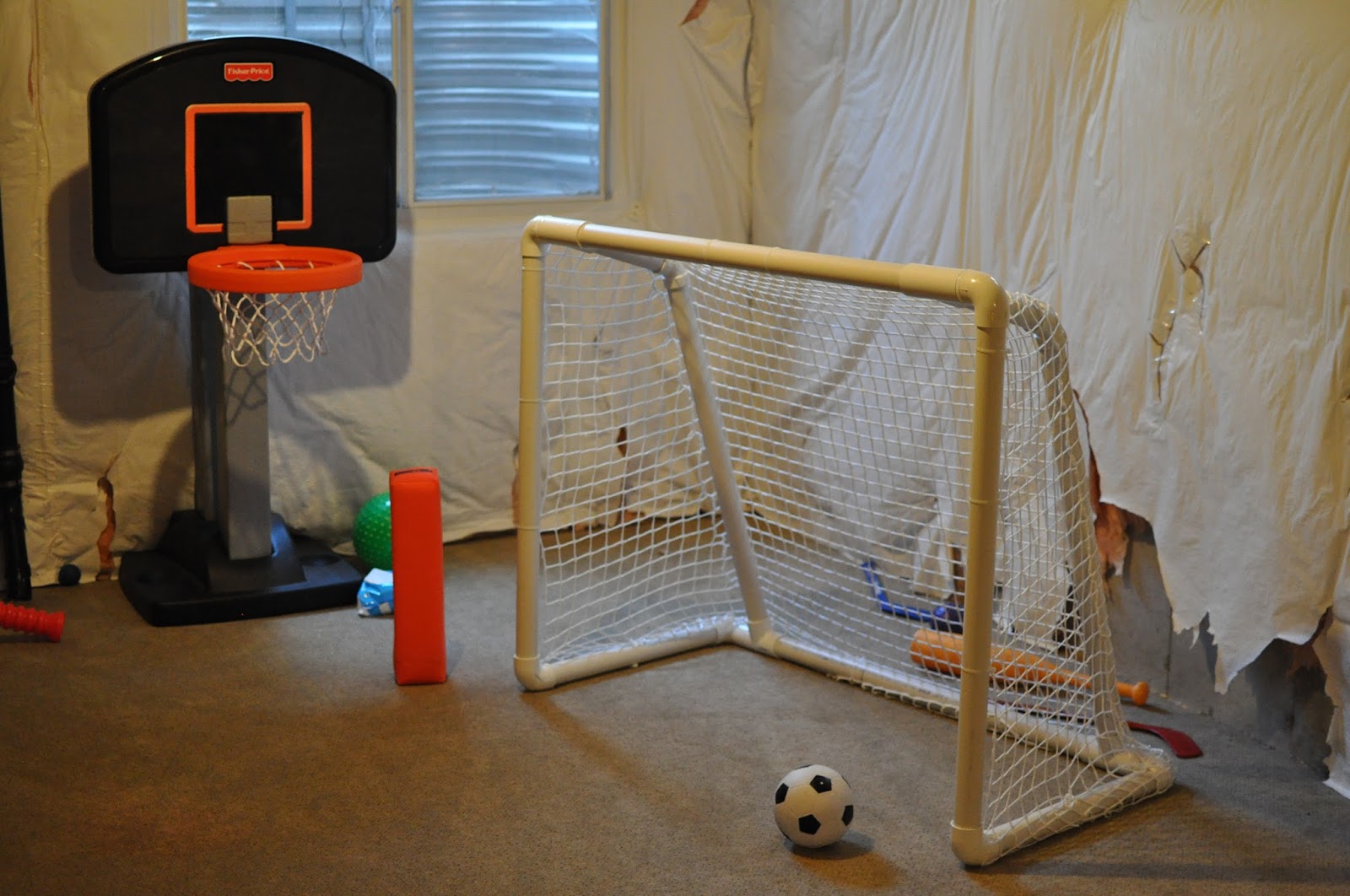 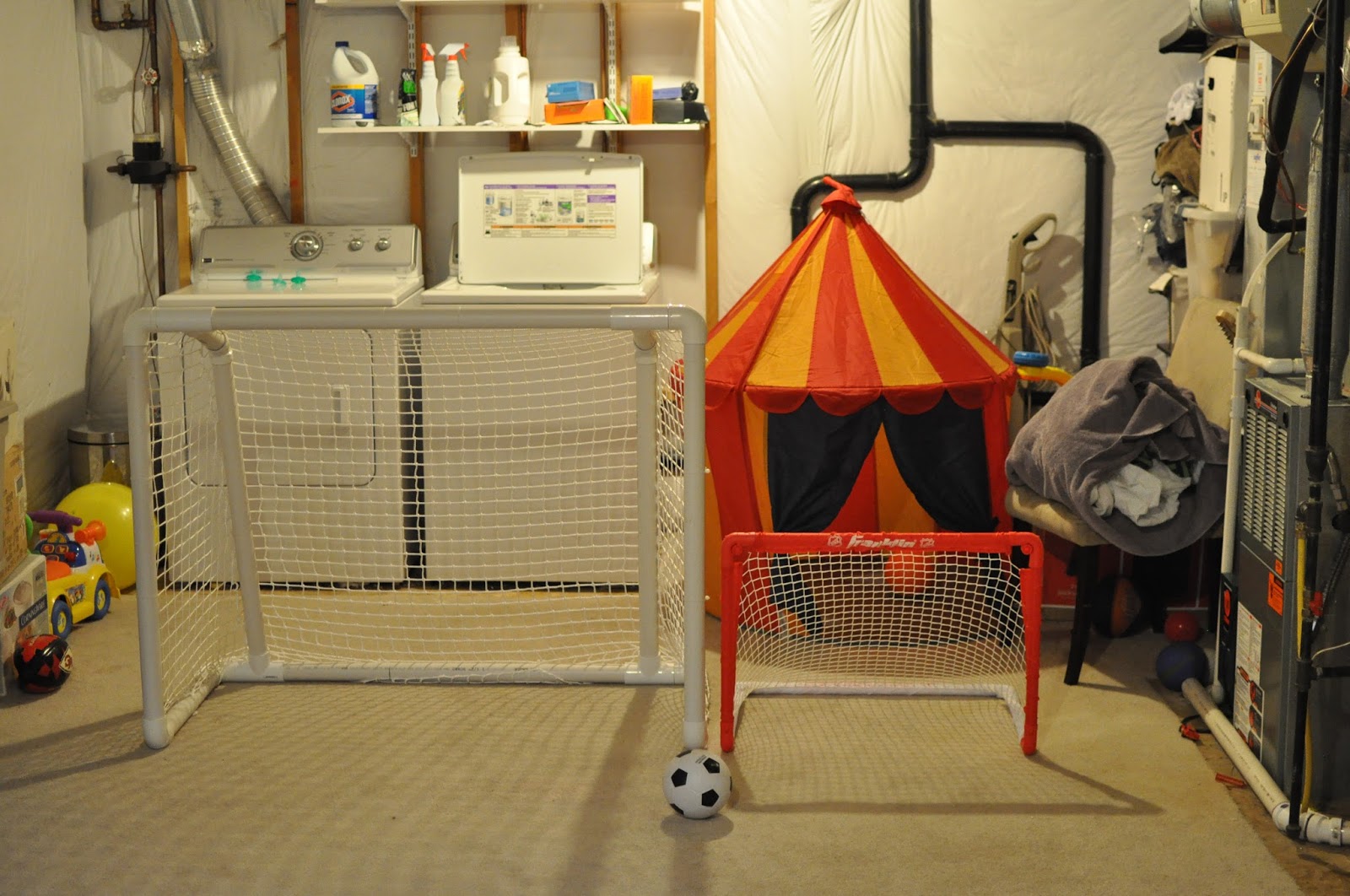 It looks nice. It plays real nice. It's very sturdy. It could probably handle a regulation soccer ball, as long as it wasn't Messi kicking it. A serious upgrade that should last their whole childhood.

I specifically bought a hockey net and not a soccer net so this could be an all-purpose goal. Soccer, hockey, even lacrosse. I'm very happy with it.
Posted by Dave Fymbo at 8:15 PM 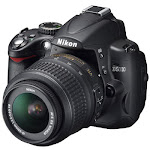